Fr. Daniel was raised in the Seattle area. Prior to being ordained to the priesthood, he taught high school theology and was also Vice President of Intellectual Takeout, a think tank located in the Twin Cities. He received his Ph.D. in Systematic Theology from Duquesne University in 2012, and has authored several articles for popular and academic audiences. Fr. Daniel and his wife, Matushka Kelly, have five children.

The Most Blessed Tikhon, Archbishop of Washington, Metropolitan of All America and Canada 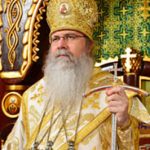 His Beatitude Metropolitan Tikhon, who is the primate of the Orthodox Church in America, was raised as an Episcopalian and converted to Orthodoxy at the age of 33.

He entered a monastic community as a novice in 1990. He was elected Primate of the Orthodox Church in America in November 2012.

His Eminence BENJAMIN, Archbishop of San Francisco and the West 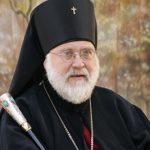 Bishop Benjamin, our diocesan bishop, converted to the Orthodox faith at 18 years old. He served as a choirmaster and deacon for years before being ordained to the priesthood at 43.

He was elected in 2007 to lead the Diocese of the West.